So, you may have heard the rumor that Sir Paul McCartney is dead. In fact, the evidence that has been presented over the years is quite entertaining. The Abbey Road album cover with Paul barefoot and songs like Strawberry Fields Forever or Revolution 9, that are purported to state messages regarding Paul passing, have all been linked to McCartney’s alleged death.

This assignment began when I received a call from Paul DuBay, a Beatles fan from San Antonio, Texas. He retained me to conduct this voice identification test because he wanted to know the truth.

For this untraditional voice identification test, I used various songs performed and recorded before and after 1966 that feature the voice of Sir Paul McCartney. I was asked to compare songs from both of these time frames (pre and post-1966) to determine if the current Sir Paul McCartney is the same person as the pre-Paul, is Dead Paul McCartney.  Below is a report that I prepared for Mr. Dubay as a result of my testing.

I am an audio and video forensic expert and have been practicing for over 30 years. I have testified in several courts (See updated CV attached) throughout the United States and worked on various international cases. My forensic practices for audio investigation include digital and analog audio authentication, restoration, and voice identification. As a video forensic expert, my practices include video authentication, restoration, and identification.

I received from you the following digital audio music files:

These songs were before and after samples from either the pre-publicity of Paul McCartney’s alleged death in 1966 or the post-Paul is Dead news story.

I am familiar with the theories that Paul McCartney was killed in a car accident in 1966. This is why you contacted me and asked that I perform voice identification and speaker recognition testing on various songs performed and recorded before and after 1966. You asked that I compare these songs from both of these time frames (pre and post-1966) to determine if the current Sir Paul McCartney is the same person as the pre-Paul is Dead Paul McCartney.

When beginning a voice identification test, I first become extremely familiar with both the known and unknown voices and list all similarities as well as differences during this repeated listening. In the case of Sir Paul McCartney, I listened to all songs repeatedly during this critical listening phase. I also measured and viewed the sound spectrum and wave formation repeatedly to arrive at my professional conclusion.

The following report will include descriptions of the similarities observed during critical listening, electronic measurement, visual inspection as well as biometric testing. I have not observed any differences in any of the voice samples tested.

I began by downloading the digital audio files that you sent onto my forensic computer then opened all using Adobe Audition CS 5.5. Next, I began critical listening to all of the vocal samples multiple times to become extremely familiar with all voice samples presented.

First, I focused on the two samples of I Saw Her Standing There as they were superior audio samples that also include a vocal number count at the beginning. Next, I focused on Long Tall Sally and Sergeant Pepper’s Lonely Hearts Club Band as their vocal delivery are extremely similar and unique.

The beginning count (1-2-3-4) of the 1963 I Saw Her Standing There.m4a version and the beginning count (1-2-3-4) from the 2002 Live Version of I Saw Her Standing There is identical which indicates the rhythm of Sir Paul’s internal metronome is the same. The vocal range and phrasing in both samples are also the same. The slight difference in vocal tone is attributed to the age difference of Sir Paul as he has matured over the years and so has his voice.

The spectrogram image below shows the exact frequency spectrum in spite of the difference in years: 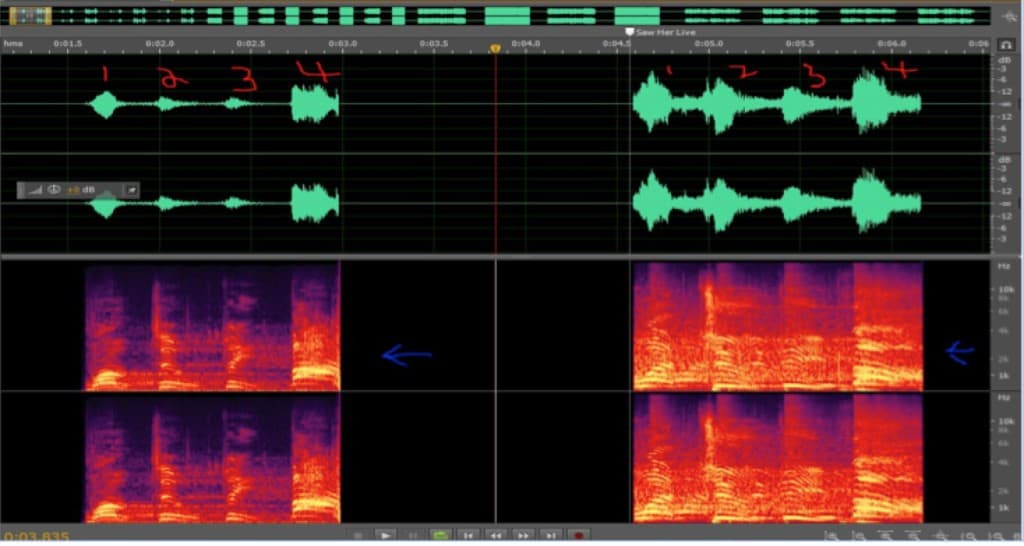 In the above image, the spectral frequency display is shown in the lower half of the image in color. The yellow, brighter colors indicate the stronger higher volume frequencies present in that portion of the audio while purple and black colors represent frequencies that are weaker or lower in volume. The audio on the left side of the image is the original recording of the song from 1963 and the portion on the right is the more recent recording from 2002. These can be heard in the comparison audio work product attached to this report.

When closely examining the formant frequencies shown in the spectral display above, it is noted that they are nearly identical. Formants are resonances or spectral created by a human voice. These are the frequencies that have the highest presence in a person’s voice and determine most of the tonal qualities of that individual voice. Because the formants in both recordings are almost identical, I conclude beyond a reasonable degree of scientific certainty that they are the same voice, Sir Paul McCartney. The slight variations can be explained by the age difference of the voice between the recordings.

The next spectrogram image below shows the sample ‘Wooo’ from the chorus of ‘I Saw Her Standing There’. The original recording from 1963 is displayed on the left and the newer recording from 2002 is shown on the right. Note the fundamental frequencies that are circled in blue in both recordings. Through close examination (narrowband spectrum analysis), it is clear that the fundamental frequencies, harmonics, and the range of the frequencies in the early recording and more recent recording are identical. Critical listening also revealed no differences between the two samples, which can also be heard in the comparison audio work product attached to this report. Therefore, through both visual inspection and critical listening, I have determined that the voice in each sample of I Saw Her Standing There is the same voice and that of Sir Paul McCartney. 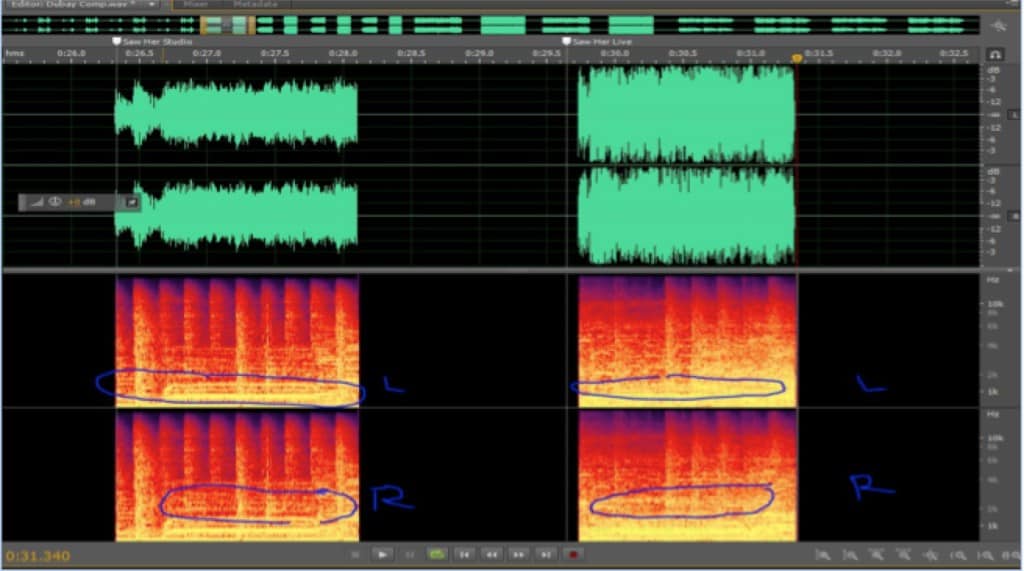 My next comparison was between the ‘1964 Kansas City’ Recording and the ‘1988 Kansas City’ recording. This is shown in the spectrogram image below:

The sections that I chose to test are circled. They are the words ‘Kansas City’. The recording to the left is the recording of the song from 1964 and the recording of the song on the right is from 1988. Through close visual inspection of the prominent frequencies in the words Kansas City, I found that both the fundamental frequencies and the frequency ranges are again nearly identical. I also used critical listening to further support my findings and have determined that the voice from the 1964 recording Kansas City is identical to the voice in the 1988 recording. The vocal expression, the pronunciation of the words, and the voice range are an exact match. I continue to conclude that all vocals from all songs submitted are that of Sir Paul McCartney.

The voice tones of all songs examined old and new, are extremely close and often identical when listening critically and viewing the narrowband waveform and frequency spectrum. Songs that were recorded farther apart in time have some small differences, which can be explained by Sir Paul’s difference in age when they were recorded. As people age their voice changes and so does their body. Vocal cords mature and usually grow deeper. Think of a boy going through puberty, the vocal cords mature and so does the voice. The same applies to people who enter their later years. Even though there are these slight differences, fundamental parts of the voice always remain the same.

I believe and will prove scientifically that a person’s singing voice is as unique if not more unique than their speaking voice. In the following paragraphs, I will compare the Pre 1966 Paul singing style with the post-1966 Paul singing style by critical analysis of Sir Paul’s vocal timbre and very loud and distinct voice. I have made observations while critically listening to the upper register, near falsetto, voice signatures for the songs Long Tall Sally and Sgt Pepper’s Lonely Hearts Club Band. I will use the studio recorded versions of both songs; however, I have chosen the deconstructing Sgt Pepper isolated vocal to compare to the Long Tall Sally vocal. This back-to-back comparison file will be available in my audio work product attached to this report.

In Long Tall Sally, pre-1966, Sir Paul’s voice is very forceful and distinct. His vocal range and style of delivery exact. His O’s in the lyric ‘OOOUU Baby- some fun tonight’ match his vocal style in the first verse of Sgt Pepper’s Lonely Hearts Club Band.

Furthermore, listening to the 1973 studio recording of ‘Too Many People’ during the intro near falsetto adlib ‘piss off cake ay ay ay…ooooh’ at the beginning of the song, I clearly hear the exact same falsetto vocal Sir Paul delivered during his entire career with the Beatles and solo. It is an extremely unique style of singing that can only be produced by the real Sir Paul McCartney. See the audio work product attached to this report. All vocals from all songs submitted are that of Sir Paul McCartney.

In the image below, Sgt Pepper is on the left and Long Tall Sally is on the right. Notice the sound spectrum fingerprints between each vocal sample are nearly identical in the display. Considering that these are different songs, this is a very significant identifier that both vocals are sung by Sir Paul McCartney.

I have also loaded isolated segments from Sgt Pepper and Long Tall Sally into a voice biometrics software program that is capable of taking unique but different voice samples and comparing them biometrically resulting in a percentage of certainty for identification.

I loaded isolated sections of Sir Paul from the beginning of Long Tall Sally and the isolated first verse of Sir Paul’s vocal from Sgt Pepper’s Lonely Hearts Club Band into Easy Voice Biometrics. The test resulted in a 53% match. I believe the percentage rate is high enough to confirm a positive identification even though by biometric software standards we would like to see a higher percentage of certainty. In my opinion, this is due to the different words being sung and measured in two different songs. See screenshot of EVB test result below: 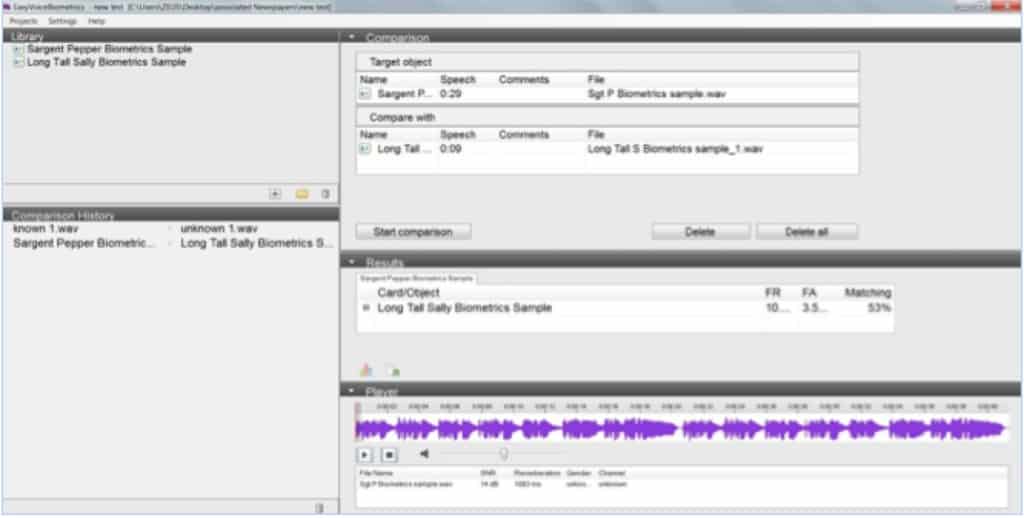 The biometric test was done as a secondary test to determine the voice similarities using another voice identification and speaker recognition testing process. Critical listening is the primary voice identification tool that I used to arrive at my conclusion (please see and hear audio work product attached to this report).

Listening to people like Dick Clark and Ringo Starr speaking as well as singing through the years, you can hear how their voices have matured yet are identifiable as being from the same person. This maturity fact is why I point out that Sir Paul McCartney’s voice has also matured. Sir Paul has an incredible voice that is extremely unique and, based on my 31 years’ experience as an audio forensic expert and scientific forensic testing; there is no other voice in the world that comes close to sounding the same or measures spectrographically the same as Paul McCartney.

Through careful analysis of the waveform and spectrogram as well as critical listening and biometric measurement, I conclude beyond a reasonable degree of scientific certainty that the voice heard in all of the song samples examined is of Sir Paul McCartney. This voice identification test confirms the rumor that Paul is Dead is not true.

This concludes this voice identification testing.

Why is Voice Identification Important?