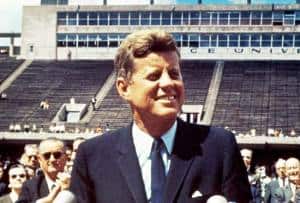 Primeau Forensics was originally contacted by Bill Kelly, a researcher for the JFK assassination in connection with Duquesne University. He asked audio forensic expert, Ed Primeau, to assemble and enhance the original Air Force One radio transmissions. It was at that time that Ed realized just how special this case would be, examining the events that were recorded the day JFK was assassinated 50 years ago.

At the end of this post is a fully enhanced digital audio file available for listening and downloading of the government conversation that occurred at the time of the assassination of President John F. Kennedy. However, the beginning of the recording is the poorest quality of the entire file.

The enhanced work products are a combination merged from two physical copies in existence. The first copy was released by the government and referred to as the LBJ tapes in the early 1970’s. In addition, a longer copy surfaced in a private auction in Philadelphia 2011. This longer copy was found in the belongings of the late General Clifton. Thanks to Bill Kelly, a veteran JFK researcher, Primeau Forensics has combined the contents of both recordings and fully restored them.

In this enhanced recording, you will hear conversations from Air Force One over the Pacific Ocean as they abort a trip to Japan and turn around, mid-air, to return to the mainland after learning about the assassination of the President of the United States. In addition, these recorded conversations between Ground Command, the White House and Air Force One include code names such as Duplex, Digest, Volunteer, Liberty, Witness, Crown, Baker, Watchman, and Tiger.

During the call they make arrangements to transport John F. Kennedy’s body, his widow, President Johnson, and the other 40 people safely back to Washington DC. The carefully coordinated and strategically executed planning is heard in this recording. The decisions about media coordination on the ground at the White House, the postmortem autopsy to be performed by law and President Johnson’s conversation with JFK’s mother, Rose Kennedy can also be heard.

After that, Ed recorded authentic footage from a private jet cockpit via a pilot who is a good friend. This footage enhances the experience of listening to the flight deck recordings with a closed caption type text add on.

For instance, this perspective is often applied to audio evidence that doesn’t have video content to immerse the viewer into the experience in which the recordings were originally created. The videos are available for viewing through the links below:

It may take a while to get your ears acclimated to this early, mobile technology. Primeau Forensics has carefully removed unnecessary radio static and squeals to accommodate better listening. Above all, it is recommended that you use a combination of speakers and headphones to best listen to these recordings.

Passing the Torch-An International Symposium on the?50th Anniversary of the Assassination of President John F. Kennedy will be happening October 17-19 2013 in Pittsburgh. http://www.duq.edu/events/jfk