It Really Is Elvis Presley 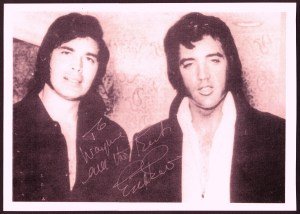 Last week I received an email from an attorney that I did some work for about a year ago, as the result of a Grand Rapids, Michigan television station contacting me with an audio recording that they believed was the voice of Elvis Presley.

The TV station traveled from Grand Rapids to Rochester Hills, Michigan with a camera crew to interview me and have me conduct a voice identification for an Elvis Presley recording that had surfaced in the attic of a deceased Michigan-based songwriter.

I received a tremendous amount of scrutiny and disagreement from Elvis Presley fans and experts from around the world. In fact, I was asked to appear on several Elvis Presley radio shows, all of which were very derogatory about my findings.

Everyone has, and is entitled to, their opinion. I believe people believe what they want to believe and when somebody like me comes along, who they don?t know, telling them something that?s different from anything they ever believed it?s a hard pill to swallow. So I don?t blame them for disagreeing with me.

I?m just happy to report that earlier this week I received a document from the attorney that I had worked for to help determine whether or not this recording was Elvis Presley.

Here is a portion of the settlement agreement that I have permission to share:

This Settlement Agreement (?Agreement?) is executed and entered into as of the 15th day of January 2013 between LORRAINE RUSSO and DONALD FRAIELI (the ?Crane Parties?), both c/o Jonathan J. Ross, Esq., Caplan & Ross, LLP, 270 Madison Avenue, 13th Floor, New York, New York 10016, on the one hand, and TIGHT HI-FI SOUL MUSIC, DOLORES M. LEIGH, RONALD LEIGH, and DWAYNE LEIGH (the ?Leigh Parties?), all c/o Michael A. Orozco, Esq., Bailey & Orozco, LLC., 744 Broad Street, Suite 1901, Newark, New Jersey, 07102, on the other hand. (The Crane Parties and the Leigh Parties are hereinafter sometimes collectively referred to as ?the Parties.?)
W I T N E S S E T H
WHEREAS, Jimmie Crane created, composed and authored an original musical composition entitled ?Livin? to Love You? (the ?Composition?) which has been registered with the U.S. Copyright Office under Registration No. PAu 001840273 dated November 7, 1993;
WHEREAS, Jimmie Crane recorded and produced a sound recording of the Composition featuring the recorded performance of Elvis Presley (the ?Sound Recording?);
WHEREAS, the Crane Parties are the heirs to all of Jimmie Crane?s rights and interests, including copyrights, in and to the Composition and Sound Recording;
WHEREAS, the Leigh Parties are currently in the possession of a particular cassette copy of the Sound Recording (the ?Leigh Copy?);
WHEREAS, the Leigh Parties have asserted that Jimmie Crane entered into agreements with Tight Hi-Fi Soul Music assigning copyright interests in the Composition and in other musical compositions authored or co-authored by Jimmie Crane (the ?Claimed Agreements?);
WHEREAS, disputes have arisen between the Parties as to their respective rights and ownership claims in and to the Composition, the Sound Recording, the Leigh Copy, and several other musical compositions authored by Jimmie Crane and sound recordings thereof;

What had happened was, the Grand Rapids station came and interviewed me and then the attorney, who was representing the family of the songwriter, contacted me after I determined that it was Elvis Presley. I had helped her authenticate this recording. Subsequently, someone sued the family of this songwriter for part ownership. Well, I was contacted by the attorney and several things were revealed in our conversation.
The authorities and the ?powers that be? in the Elvis camp came forward and admitted that the recording was indeed the voice of Elvis Presley. The song is going to be sold. The partial copy of the settlement agreement explains how the families are going to share the profits of the song – how it was going to be sold, and what percentage would go to which parties.

It?s very rewarding to me, as a professional, to have confirmation from the authorities ? the people from Elvis Presley?s estate ? by their admission that the voice is Elvis, and to see the families who are involved in the litigation about the rights and percentage of profits have come to an agreement on how this will all be resolved.

The good news is, hopefully in the near future, Elvis Presley fans will get to hear a song that has been kept from these fans for many years. Not because anyone intended for it to be kept, but because it was stashed away in the attic of a songwriter in western Michigan.

One thought on “It Really Is Elvis Presley”