In the last 24 hours, I have received several calls asking my opinion about the voice screaming for help in the background of a 911 call by a woman who heard gunshots outside her home. I was emailed a link to Mother Jones and listened to the recordings which I have posted below.

Below is the 911 call with male screaming in the background asking for help. Who is the male?


To read the transcripts from the 911 Calls Placed on the day of the incident, please Click Here.

The male voice in the background can be identified. If I were to conduct a formal voice identification test, here are the steps I would take:

1. First, I remove the samples of the screaming from the 911 call and isolate them in a digital audio file. Background noise is also removed and I raise the volume of the male screams.

2. Second, I remove portions of George Zimmerman’s voice from the 911 call to serve as an exemplar.

3. I then would edit both speech samples back to back and compare.

4. Fourth, I ask for a speech exemplar from George Zimmerman screaming for help.

Do you believe the voice screaming is George Zimmerman, Trayvon Martin, or another male? 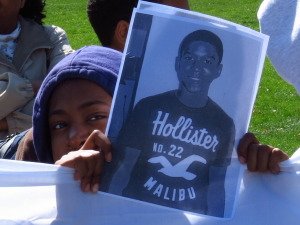 After a year, it’s pretty apparent there were two people present during the Trayvon Martin shooting, Trayvon Martin and George Zimmerman. The question still remains; who screamed for help the night of February 26, 2012, and why is this important?

If it’s Zimmerman who is screaming, it exemplifies that he was the one under attack by Trayvon. If the screaming is Trayvon Martin, then this would add to previously revealed adverse behavior by Zimmerman acting aggressively toward Trayvon. Remember, Zimmerman ignored the police when they told him not to follow Trayvon.

As the State of Florida v. Zimmerman begins to heat up, forensic experts for the prosecution and defense are ready to begin the voice identification testing process to determine who cried for help the night of February 26, 2012.

Yesterday, April 30, 2012, the court has asked experts for the prosecution and defense to produce any enhanced recordings they have of the call to police by Zimmerman. I believe the court is attempting to understand and identify all audio evidence that is available to aid forensic investigators.

So far, we have been told that there are no audio or video recordings of Trayvon Martin. Therefore, audio forensic experts can only use voice samples, previous recordings, and exemplars that are available to conduct a voice identification investigation and eliminate or identify George Zimmerman as the source of the cries for help based on a degree or percentage of professional certainty.

The first step in any voice identification test is to aurally listen to the evidence and exemplar recordings edited back-to-back using critical listening skills developed over the course of the expert’s forensic career. In the video below I have edited back-to-back audio samples taken from the police call by Zimmerman the night of February 26, 2012, when Trayvon was killed and an exemplar or reenactment recording of George Zimmerman created by the authorities.

In a perfect world, audio forensic experts listen for isolated speech sounds like vowels and consonants for their uniqueness, similarities, and differences as well as phrases and sentences. Pronunciation of words are noted, the way words flow together and speech characteristics like accent and dialect, age and gender or nationality are noted.

The Art and Science of Removing and Restoring Audio From Video