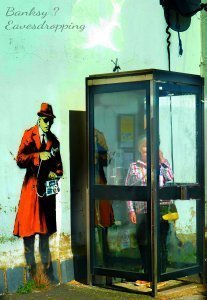 You’re having problems at home. Your spouse has been acting very suspicious recently. You can’t help but think that your significant other is having an affair, but lack of communication with that person makes it impossible to find out the truth.  In a desperate attempt to find out what’s really going on when you’re not around, you decide to set up audio recorders all throughout your house to use for possible audio evidence against your spouse.

This is a practice we see every so often at Primeau Forensics. We’ve received a handful of cases in which a third party requests an analysis of audio taken from digital surveillance of a private conversation. What these people don’t realize is that these actions are against Michigan’s eavesdropping/surveillance laws (laws vary from state to state). The consequences of eavesdropping on a private conversation are dire and can lead to not only a considerable fine but also possible jail time.  Before we dig deeper into this subject, we must ask the question: What exactly constitutes eavesdropping?

According to Michigan State Law, eavesdropping is defined as to overhear, record, amplify, or transmit any part of a private discourse of others without the permission of all people involved in the discourse. In other words, the person doing the eavesdropping must have consent from both parties to record the private conversation.  This is what’s known as two-party consent.

You might be thinking, ‘But this is my home!’ I have the right to dictate privacy in my own home!? This is also not true. Michigan State law defines a private place as a place where one may reasonably expect to be safe from casual or hostile intrusion or surveillance but does not include a place to which the public or substantial group of the public has access. This includes an empty home. As long as the location is not somewhere the public can easily get to, it’s considered a private place. So yes, it is even illegal to eavesdrop in your own home.

In the state of Michigan, eavesdropping is considered a felony. The potential consequences of these actions include imprisonment in a state penitentiary for up to 2 years, a fine of up to $2,000, or any combination of both.  Obviously, this does not include the potential fines you’d face if the violated parties request a civil case.

In case the purpose of the blogpost hasn’t become clear by now, the point is that eavesdropping is very illegal, and the consequences are very serious.  Even if you do find some juicy inside secrets, Michigan law also states that using or divulging any information which you know or reasonably should know was obtained in violation of the wiretapping laws is strictly prohibited. So, if you suspect something is going on at home, the risks involved with eavesdropping just aren’t worth it. Healthy communication with your spouse is a much safer option when issues at home arise.

photo credit: Eavesdropping ( Hello Hello anyone there ) via vecteezy (license)