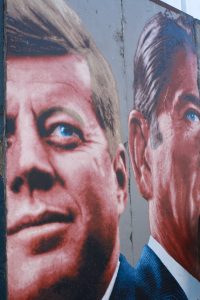 I have been asked by an anonymous organization to authenticate the air traffic recordings from Air Force One originally recorded on November 22, 1963. The recordings were released to the public January of this year.

This organization wants to know as much about the recordings as possible from a forensic perspective. One of the questions being asked is, “Are the recordings authentic”

When an audio forensic expert is asked to review and authenticate any audio recording, it is best practice to always begin the investigation with an unbiased perspective. One of the first activities is to listen completely to the recordings, noting any anomalies or other significant observations.

The second step is to view the sound wave formation and visually inspect the wave for any abnormal electronic characteristics like reverse polarity or a variance in noise floor. A complete description of the recordings and their history can be viewed below and is exact from Wikimedia.

The Raab Collection has donated an original audio tape recording to the National Archives that includes taped conversations on President Kennedy’s official airplane, “Air Force One”, during its flight following his assassination on November 22, 1963. The conversations were between pilots and other individuals on the flight and various individuals in Washington DC on the flight back from Dallas to Andrews Air Force Base. It is two hours and 22 minutes long.

The Raab Collection recently discovered two open reel audio tapes containing identical excerpts from the Air Force One flight on Nov. 22, 1963 among the papers and other memorabilia of Army General Chester “Ted” Clifton, Jr.. General Clifton served as senior military aide to President John F. Kennedy, and had received the tapes from the White House Communications Agency (WHCA). The original audio tape recording is described as “Radio Traffic involving AF-1 in flight from Dallas, Texas to Andrews AFB on November 22, 1963”.

The conversations were captured by the WHCA, which routed all phone calls and radio traffic. The tape also includes communication between the WHCA and a second aircraft of the Presidential fleet, known as 86972 (by its tail number), which was en route to Tokyo at the time of the assassination with members of the President’s cabinet.

The recording includes references to new code names and incidents. Among them are a private conversation by head of the Secret Service Jerry Behn about the disposition of the President’s body; an expanded conversation about how to remove the body from the plane and where to take it; an urgent effort by an aide to Air Force Chief of Staff Curtis LeMay to reach General Clifton; and attempts to locate various Congressmen from Texas.

The National Archives Lyndon Johnson Presidential Library has a different version of the recording, and is approximately 40 minutes shorter.